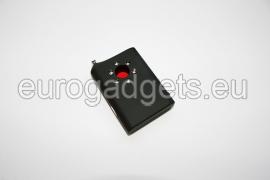 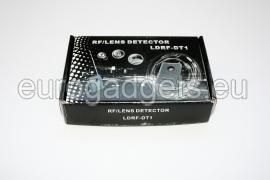 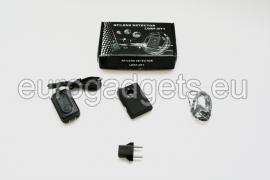 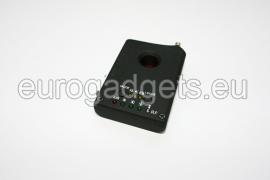 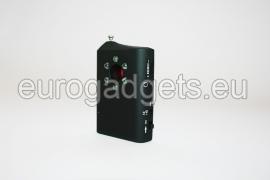 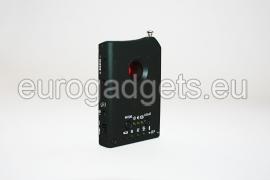 Price:
51.95 €
Promotion:
- 30%
Price includes VAT
End price:
36.37 €
Product description DetailsWarranty
This multifunctional device detects hidden cameras and other spy wireless devices.
Detects RF signal with frequencies ranging from 1MHz to 6.5GHz. including GSM, WIFI, FM, VHF, UHF, 900/1200/2400 wireless audio and video signals.
With built-in bright red LED you can see the lens of any hidden camera.
There are two modes for indicating detection of RF signal - sound and vibration. You can also use a headset.
The device has four light-emitting diodes that will show you the signal strength of the detected object.
Built-in rechargeable lithium-ion battery 500mAh, with a nonstop operating time over 6 hours while detecting hidden cameras and more than 15 hours while detecting of RF sources.
Easy-to-use device with a very small size.

detector listening devices , cameras and bugs radio frequency Device features: - Multi-functional device that detects absolutely all kinds of hidden cameras and other spy wireless products. - Detects devices that operate on radio frequency / RF / range from 1MHz to 6.5 GHz, for any kind of radio frequency devices including gsm- and WIFI, Bluetooth , FM, VHF, UHF, 900/1200/2400 and audio and video transmitters that operate on these frequencies. - Using a super bright red LED light can find all kinds of hidden cameras lenses , and camera button , micro camera, mobile camera etc. . - The detector can be used in two modes to detect hidden spy gadgets - mode cheese and vibrate mode . Or in other words when the detector detects a device that you spy if he is in the first mode will include cheese and besides , it will start flashing LED diodes will hear an annoying sound and continuous . However, if it is in vibrate mode , it can detect spy devices without a sound , only vibrates , but if you are with the headphones that also keeps you hear the alarm again , but only you . This is very convenient if you want to understand the people that check for beetles. - Adjustable mode detection lens / lens detector /, and by changing the frequency of flashing of the light. - Built-in 500mA rechargeable lithium-ion / LIION / battery runtime after a charge about 6 hours for lens detector and up to 15 hours for radio frequency detector / RF detector /. - With an extremely small footprint , easy to use , anyone can learn to work with it without the need for preparation. Technical Parameters: - Frequency of operation / detection : 1 MHz to 6.5 GHz. - LED lens detector : up to 70000 MCD lights - Dimensions: mm 65h48h15 - Length of antenna : 123 mm - Battery Capacity : 3.7 VDC 500mA - Voltage of the charger : 5-6 VDC - Power consumption: less than 100 mA Manual for RF / lens detector: At several points in providing information on how to operate the detector and what its buttons or indicator of what action is responsible. 1. Function selection. 2. With the lens detector mode, here shines the glow of varying frequency. 3. Lens detector mode. 4. Radio Frequency / RF / alarm mode. 5. Radio Frequency / RF / silent vibrate mode. 6. Indicator that lights up when the battery is depleted. 7. In operation with the lens / lens detect mode / responsible for this indicator flashing speed and mode radio frequency showed the weakest signal. 8 . In operation with the lens / lens detect mode / responsible for this indicator flashing speed 2 and the standby frequency radio shows average signal strength. 9. In operation with the lens / lens detect mode / responsible for this indicator flashing speed 3 and mode radio frequency, shows the largest signal level . 10 . Indicator under RF modes shows that looking device is closest to you. 11 . Antenna. 12. Switch for turning on / off the device. 13. Output charger . 14. Headphone jack for radio frequency RF mode where when detecting device includes an alarm. 15 . Adjustable trigger sensitivity . 16. Strong LED lamp. 17. Window in which during the regime lens can monitor searches for an object like a mirror room or other area surveyed for a device or a camera that is too small. Jobs in lens mode 1. Turn on the device by the On / Off switch . 2 . Switch mode detection lens by pressing the LED. 3 . Flashing speed detector with lens is first set to blink for a second. Switch with LED button and you will see that the indicator changes its speed longer flashes once every 0.5 seconds . In another shift of the a key , the speed indicator changes again and now one time to 0.05 seconds. 4 . Once you have selected mode, place the window of the device close to your eye and watch over it to see the hidden camera lens . devices within radio frequency / RF / mode 1. Turn on the device by on / off switch . 2 . Extend the antenna to its highest position. 3 . Press MODE, to switch to radio frequency operation with alarm. Change the sensitivity of the circular side knob to the highest position and discover emanations radio signals. When we perceive the general noise, louder and closer emitted and received by the device , change the sensitivity of the detector to the lowest value so that you can easily find the position of the source. The more you approach the source of radiation radio signal , ie camera, bug and other spy gear or just your gsm, more alarm detector is amplified and LED indicator shines with bright red light. 4 . To switch to silent mode , press the button again MODE. Again change the sensitivity of the radio signal to the highest position, then you hear the radio broadcast signal search drive, decreased sensitivity to the lowest position to be able to more easily locate the location of the radio device. Closer you get to it , the stronger your vibration detector and LED indicator light intensifies until bright red.